Taken directly from PbNation:
To begin, the owner of the site in question is Mike Phillips, a former member of PBN before being banned for the following reasons –>> http://www.pbnation.com/showthread.php?t=2735639

For anyone wondering why I choose to remain ANONYMOUS please see the screenshot and a separate story below of him threatening people he has encountered online:

Here is a tech paintball screenshot showing how Mike likes to threaten people. (see below) 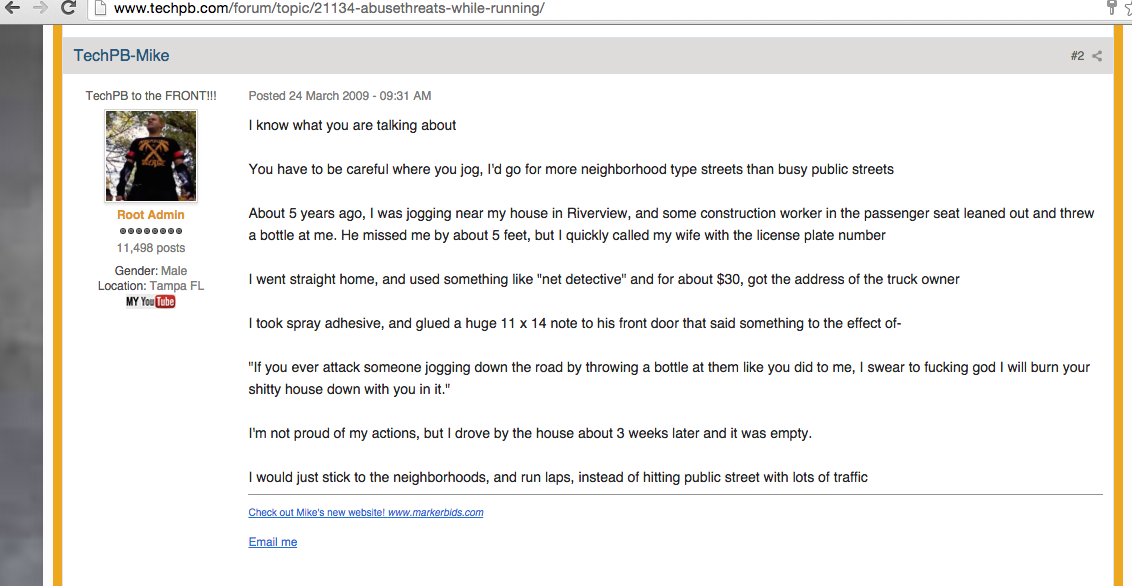 Over the past few months me and many other members of a paintball auction bid site (paintball marker-bids) have officially been scammed.

It has been months since many of us won our auctions with no resolution in sight. The owner is citing lack of funds due to “charge backs” even though he has our money and we have won auctions, he is not buying or shipping our items. He has stated it may take him up to 6-7 months or longer to get us our items.

I am posting this because the owner of the site shut down his forum when members started complaining and now the members have no where to go.

Video Link: http://www.youtube.com/watch?v=bTUL5PX2Wu0
He also went on a witch hunt for “Paintball Bid Wars” and he is doing the same thing.

“They’re taking money from your fellow paintball players, they’re putting it in their own ****ing pockets and they’re not mailing out prizes to people who legitimately won them”

He use to have a person audit the site for fraud but the person stopped due to non payment from Mike. UPDATE: looks like the site has posted the following messages to its home page.

As of this post on 68caliber.com, Mike has still not delivered the guns, still not given back any money.  Welcome to the Hall of Shame Mike. Of course PaintballX3 is long out of business, but let’s add them to our hall of shame section for posting up some more than amazing 50 caliber paintball results that could not be backed up. Read more…

The sport of paintball is in danger from certain types of players, referees, careless promoters and complacent industry people!!! This one highlights Chris Lasoya and Jeremy Salm Originally by: Guy D. Cooper - Printed in 2003